In spring of 2011 Belfast Interface Project commissioned a piece of research carried out by the Institute for Conflict Research to identify and classify the known security barriers and associated forms of defensive architecture in residential areas of Belfast.

This interfaces map and database — provides a comprehensive listing with photographs and descriptions of security barriers and defensive use of space throughout the city, organised geographically by cluster — draws heavily upon the final research report produced by ICR and brings together photos and information from past BIP research projects including those undertaken by Frankie Quinn in 2005 and ICR in 2008.

1. Categories and Locations of Barriers

The report identifies 99 different security barriers and forms of defensive architecture across the city associated with residential areas. These include:

Table 1 sets out the broad locations of these 99 barriers across the city:

The different structures and blighted spaces are contained within 13 different ‘clusters’ — groupings of distinct and separate but related instances of defensively used space within the city — similar to the main interface areas identified by the NIHE in their internal review of interface areas carried out in 2006.

The research also identified 10 different owners of the various structures (Table 2). The largest number of barriers (58) are owned by the Department of Justice (who inherited them from the Northern Ireland Office following devolution of policing and justice powers in 2007), 19 are owned by the Northern Ireland Housing Executive, 7 appear to be in private ownership, and 3 belong to the Department for Regional Development. To date it has not been possible to identify the owners of 4 of the barriers. 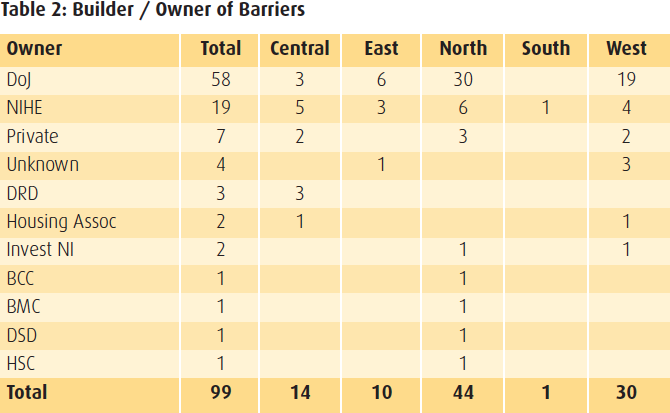 The report also includes a number of examples of blighted land which are immediately adjacent to an interface barrier. The 58 examples include 20 areas where there are 1 or more derelict properties (in some cases there are numerous such properties plus empty plots of land), 32 locations where land remains unused and 6 sites which are currently used as car parks. At best this is a conservative list of unused or underused land in the immediate vicinity of an interface.